“For thousands of years, the Chinese have known that beauty comes from the inside. At least as early as the Sung dynasty, (960AD- 127AD) cosmetic acupuncture was used by the Empress and the elite upper class.”

IS COSMETIC ACUPUNCTURE RIGHT FOR ME?

We all know that beauty comes from the inside so each course of cosmetic acupuncture is designed especially for you, treating you as a complete whole, body mind and spirit.

Moxibustion is the burning of an herb called Mugwort.

The herb, or moxa, can take many forms, including cigar-like moxa rolls, raw rice grain size pieces, and compressed smokeless sticks and cones.

When burnt its warming nature is useful for helping to expel cold and damp from the body as well as warming the body’s channels.

The bitter and acrid aspects of Mugwort help to break stagnation, clear phlegm, and rectify the qi and blood.

How long has moxibustion been used?

The actual Chinese character for acupuncture literally translates into “acupuncture-moxibustion.”

More than 3,000 years ago, during the Shang Dynasty in China , hieroglyphs of acupuncture and moxibustion were found on bones and tortoise shells, meaning the practice precedes that date.

The root word, “moxa” is actually derived from the Japanese.

What are the benefits of moxibustion?

Moxibustion is used for people who have a cold or stagnant condition. The moxa stick is burned to warm up the blood and qi that are not circulating well. It is particularly known for its ability to turn breech presentation babies into a normal head-down position that is considered safer during childbirth.

In a 1998 study published in the Journal of the American Medical Association , 75% of the pregnant women in the study had breech fetuses that turned in the normal position. Moxibustion is also used to treat inflammations. It is also highly regarded for menstrual cramps, where the stick is waved over the abdominal area. Often, the cramps disappear immediately.

Cupping is a therapy that complements an acupuncture treatment. Suction cups placed at various points on the body create a vacuum that draws toxins to the surface of the skin to be released.

The effect of this is to encourage the flow of Qi (chi) and blood in the area beneath the cup. By moving the Qi and blood, local stagnation and pain can be cleared, Qi flows more smoothly, enhancing its function to heal. 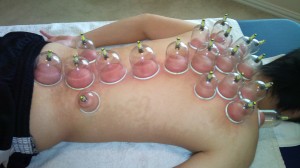 What are the benefits of cupping?

Cupping therapy removes local congestion and augments the blood circulation to the areas that were originally poorly supplied and thereby relieves the symptoms of numbness and aching pain.

With a nursing background (SRN SCM), I am a registered acupuncturist with AFPA.
I received my certification from the Acupuncture Foundation of Ireland and I completed Post Graduate training in China under the direction of Professor Lu Jin specialising in Abdominal Acupuncture.
I practise the ancient Chinese system of Qi Gong.